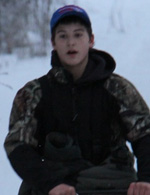 Rookie of the Year
Sportsmanship