Eye on the Jr: One Champion, All Winners!

Close, tight, side by side, neck and neck, nose to nose or nip and tuck – all are perfect descriptors of the Jr. Iditarod stage event.  A mere 6 seconds separated first and second place and five minutes lapsed between second and third place in Jr. Iditarod XLV.  At times there were multiple teams under the finish banner completing bag check and signing off the trail.  The spread from first musher to last musher on both days was about two and a half hours. 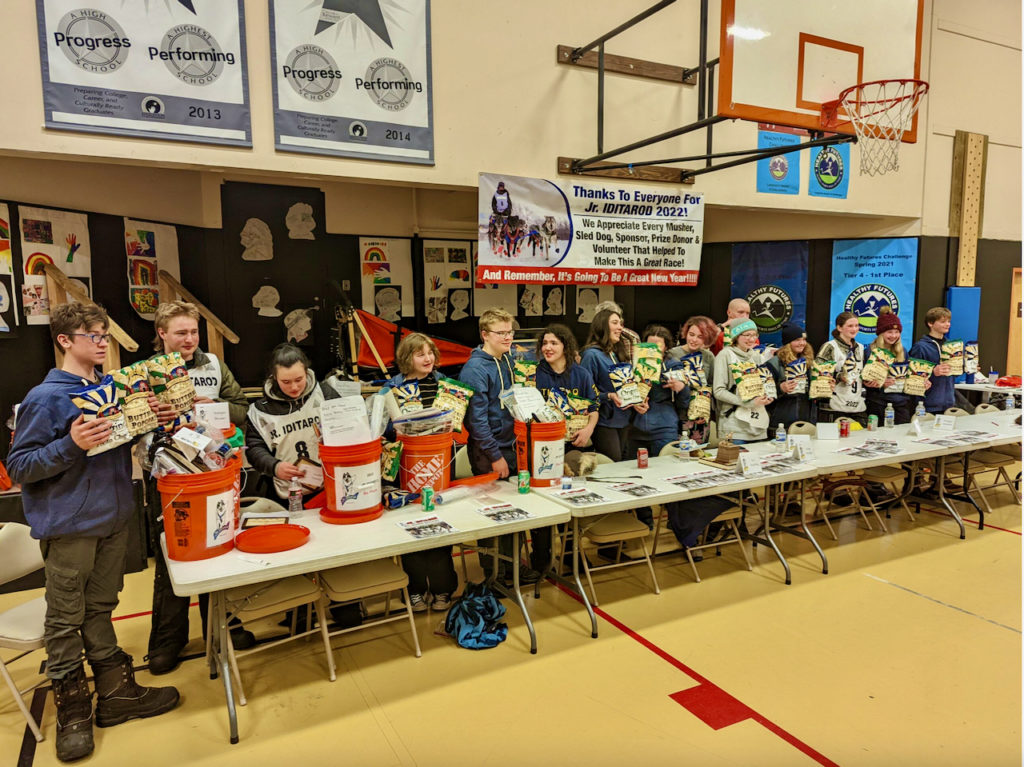 The mushers, age 14 to 17 who participate in the Jr. Iditarod are clearly a cut above most kids in the age group.  Not only are they responsible for keeping themselves safe but they are out there with 10 sled dogs who need to be cared for and fed.  These kids are great working with and caring for their dogs, they are great dog drivers and they are great people!  There is one champion is a race but every participant is a winner.  They have dreamed, planned, prepared and persevered!

Mother Nature threw a couple of big curve balls this winter that affected mushing – tons of snow and warm temperatures that made the snow even heavier.  The result – dreaded overflow as the heavy snow pushed ice downward on lakes and rivers causing water to over flow the sides of the ice pack and flow up through cracks and holes.  Jr. Iditarod responded by moving north to Cantwell and the Denali Highway.  Not only was the race moved but the format was altered to a stage race. 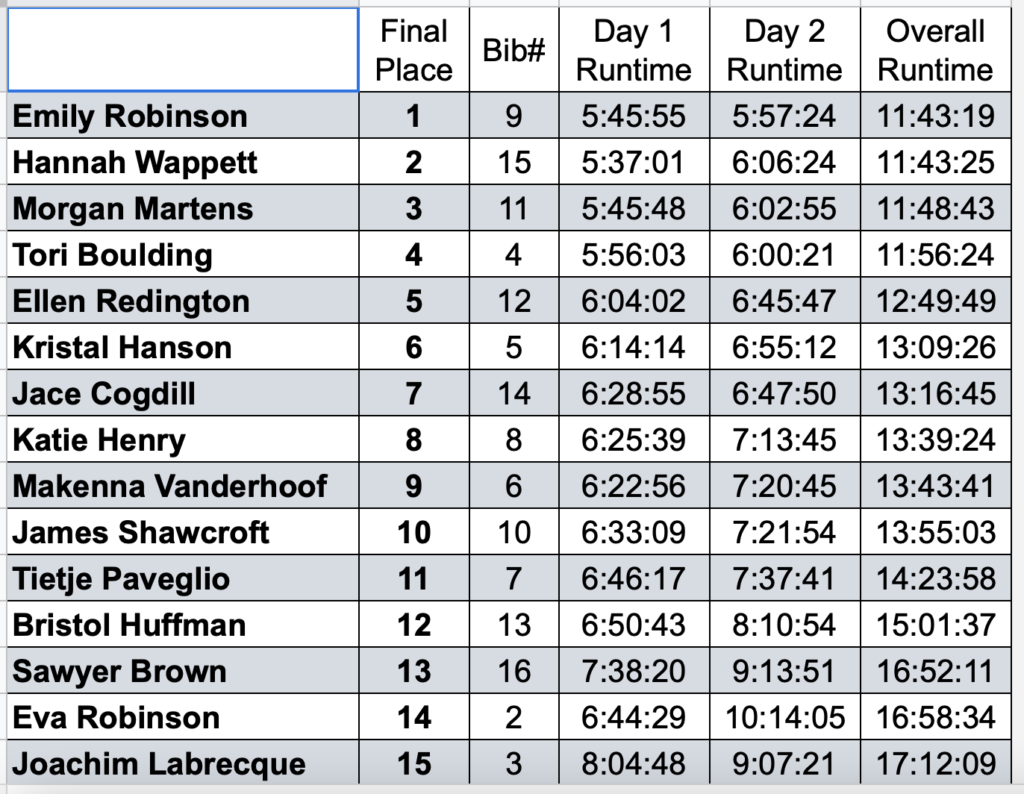 The typical Jr. Iditarod would consist of a 75 mile outbound run from Knik Lake to Yentna Station.  The teams would then camp for a 10 hour plus differential layover in the woods at Yentna.  After serving the layover the teams would head to the finish line 75 miles away in Willow.  The first person to cross under the finish banner was the champion.

To avoid the overflow, the race was run on the Denali Highway as a stage race.  Stage I was a 64 mile round trip done on Saturday.  Stage II was the same distance and same route done on Sunday.  Elapsed time for the two stages was combined to determine overall position.  There was math that had to be done before the champion and overall positions of every contestant would be know.

The  celebration of success banquet was held at the Cantwell School and catered by Al and Tanjela Eischens of Homestyle Catering.  The menu, a hearty chicken dinner.  Awards were presented and accomplishments were recognized.  Each musher received a plethora of prizes donated by Wasilla area businesses and merchants.  Every finisher received a scholarship from funds provided by Iditarod and Janssen Funeral Homes.  The champion received a Stewart sled and bag combo donated by Northrim Bank.  Sled Dog Systems donate a sled/bag combo to be awarded to a 2nd – 15th place musher. 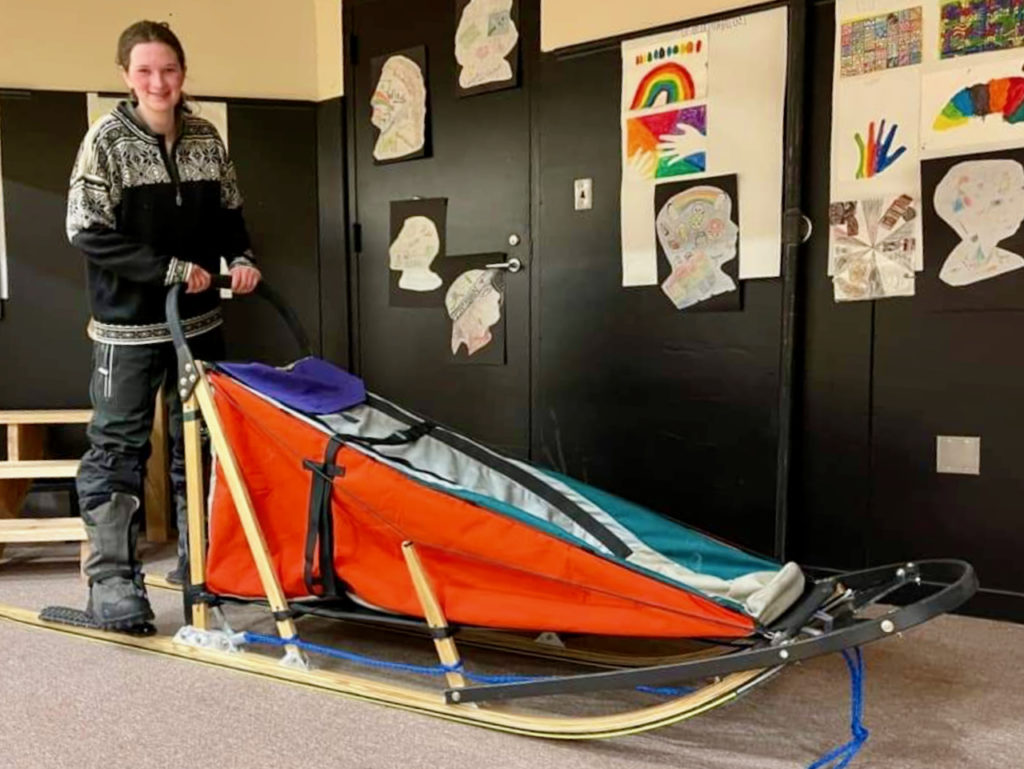 Mushers placing 6th through 15th all received $500 scholarships.  Veteran Kristal Hanson of Anchorage claimed 6th followed by veteran Jace Cogdill of Willow in 7th.   Rookie Katie Henry of Kotzebue took 8th followed by rookie Makenna Vanderhoof of Willow in 9th and Veteran James Shawcroft of Fairbanks in 10th. The final five mushers in their order of finish were all rookies –  Tietje Paveglia of Eagle River, Bristol Huffman of Kotzebue, Sawyer Brown from Ester, Eva Robinson from North Dakota and Joachim Labrecque of Willow who was recognized for his perseverance with the Red Lantern Award.

Bristol Huffman was the lucky musher to have her name drawn and received the Sled Dog Systems sled and bag combination.  The Blue Harness award goes to leader Frost on Eva Robinson’s team.  Tori Boulding received the Humanitarian award along with a $2,000 scholarship.  Jace Cogdill was chosen by his peers to receive the Sportsmanship Award which also includes a $2,000 scholarship.

Race officials and veterinarians praised the youth for their mushing, camping and dog care skills.  Dogs stood at the finish line clearly wondering why they had to stop – running was so much fun.  There is one champion but all of the Jr. Iditarod mushers are winners.  They are all responsible individuals who accept and embrace challenge.  Congratulations to all the mushers!

Many thanks to photographers Whitney McLeran, Julia Redington as well as Teacher on the Trail Jim Deprez for supplying photos of the Jr. Iditarod to share with readers.