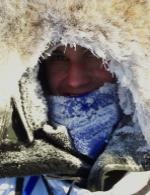 Jeremiah Klejka, 17, has competed in the last two Jr. Iditarod races. His sister, Jessica, became the Jr. Iditarod champion in her fourth Jr. Iditarod in 2008. Jeremiah says he started mushing with his older sister when he was six. A junior at Bethel Regional High School, he participates in band and cross country and says he enjoys reading and running. He plans to attend the University of Alaska Fairbanks following graduation and says he will continue mushing.