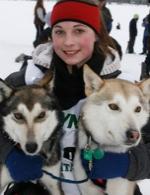 Merissa Osmar, 16, is a 3rd generation musher and followed in her dad’s footsteps when she won the Jr. Iditarod in 2010. He is the daughter of Tim Osmar, three time Jr. Iditarod winner and grand daughter of Dean Osmar, 1984 Iditarod champion. Merissa started mushing when she was three, “because I loved being with my dogs,” she says. She continues, “I won the 2010 Jr. Iditarod and I enjoy everything mushing has to offer.”
Merissa is in the 11th grade at Skyview High School and participate sin track and soccer at school. She also enjoys sports, skiing and snowboarding. Merissa says she wants to go to college and become a veterinarian. And she says she will continue mushing.