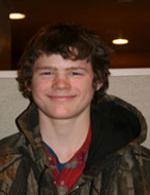 David “Mac” May, 17, began mushing about three years ago. He started the Jr. Iditarod last year but was unable to finish. He also plans on running some other junior races this year. “I was born in Mississippi and had never thought about running dogs until I moved to Alaska six years ago. But when I first started running with the family pets, I was hooked.” A junior in the Alaska Gateway Correspondence program, Mac says “my only activity is mushing. I love it.” He also says he enjoys doing anything outside in Alaska including fishing, hunting and traveling. He plans to live in Alaska all his live and says he will continue mushing.