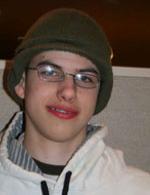 Matthew Durden, 14, says he started mushing when he was in the third grade because it “looked like fun for the dogs and me.” Randy Cummins has been helping him train and he will be using Randy’s dogs in this, his first, Jr. Iditarod. He has six dogs of his own, but previously he did only sprint mushing. In 2004 he won the Jr. World Championship and was using two of his own dogs. He is an eighth grader and attends the DCS Cyber School and plans to go back to public school for his freshman year in high school. He plans to go to college and says he will “most definitely” continue mushing. He enjoys hunting and fishing when he has time.