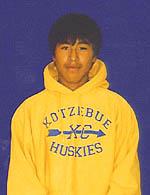 Gerald Outwater, 16, is a high school sophomore in Kotzebue High School. His history with dog mushing began when he was four years old and started racing one dog. He grew up around his grandfather’s kennel helping him manage 15 to 20 dogs every year. He raced in the Kotzebue Dog Mushers Association sponsored junior races and the Arctic Circle Junior Championship races. By the time he was six years old, he was racing three dogs. In 2001, at the age of 10, he petitioned the Association for an exemption to race in the eight dog limited junior races. The age limit for those was 12-17. The exemption was granted and he won the championship that year. As a freshman he started for the junior varsity basketball team and by the end of the season, I was playing with the varsity. “While basketball is fun, the highlight of my athletic participation was placing first in the ASAA Regional 5K cross country event this year and running in the state competition two years in a row representing Kotzebue High School. I have also wrestled for the Kotzebue wrestling team the last two years.” Recently he and his grandfather, Willie Goodwin, Jr., have been working with Iditarod veteran Joe Garnie of Teller. “Watching me handle dogs, Joe understands my dreams of racing dogs in bigger races. He has entrusted me with a team of his dogs to run the Jr. Iditarod.