Eye on the Jr. – Celebration of Success 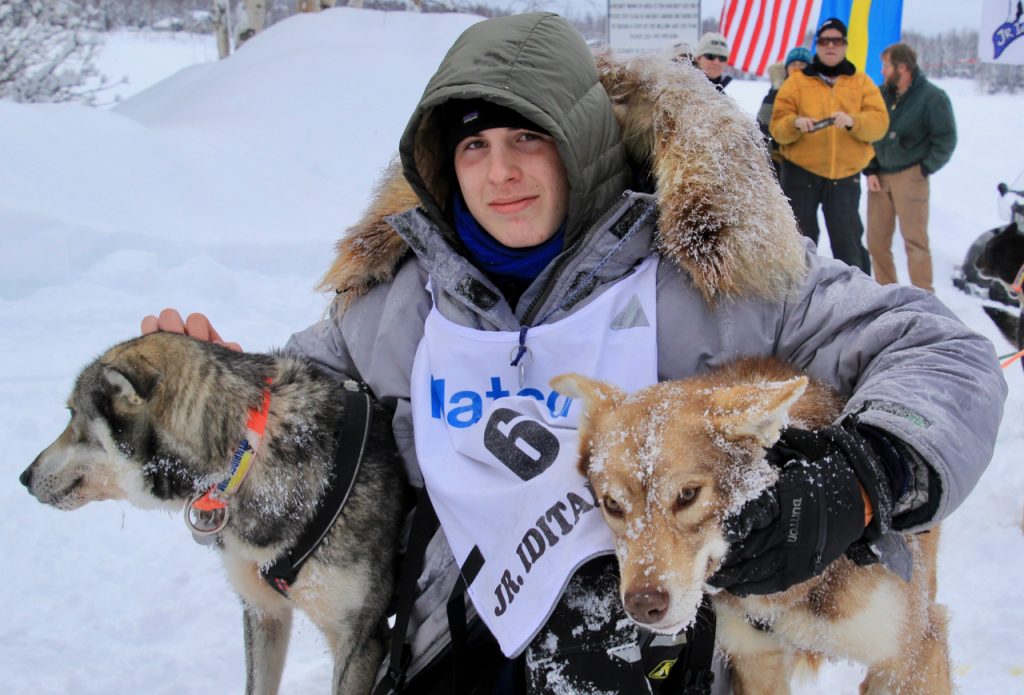 The Celebration of Success for the 2020 Jr. Iditarod was held in the Willow Community Center.  Snow had fallen during the night all along the trail and continued through the day on Sunday.  That translates into a slow run for the home stretch of the race.  The mushers and dogs handled it well.  To quote Ida Kohnert, “To be out in nature with my best friends is the greatest thing in the world.”  You notice, she doesn’t specify the trail conditions.  It’s about being out in nature and the bond between musher and canine athletes. 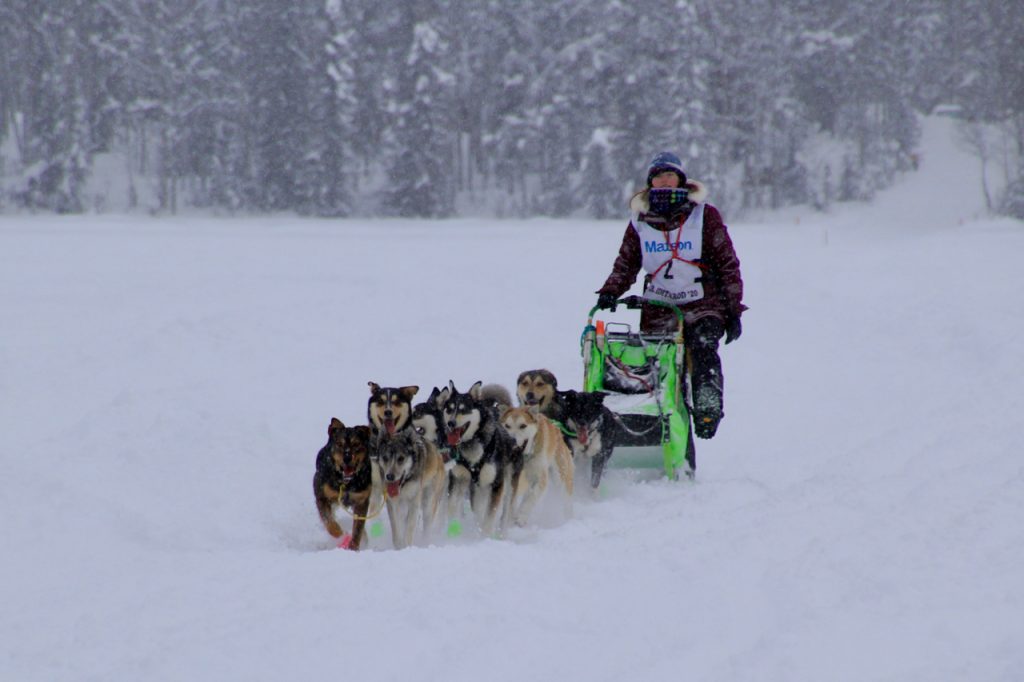 Julia Cross from Thunder Bay, Ontario led the race out to Willow and through Su River Crossing on the return trip.  With Cross breaking the trail on the first half of the return run, Nicolas Sousa’s dogs were storing up energy for a push to the finish. 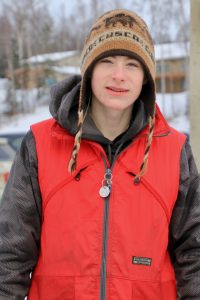 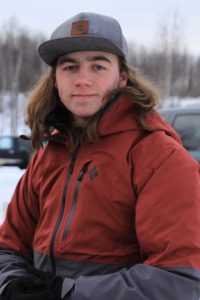 The final two mushers, Sam Paperman and Bjorn Keller, completed the race after the banquet concluded.  Sam is from Seward.  He began mushing with his neighbor and Iditarod Veteran Travis Beals.  Bjorn Keller grew up near McCarthy and now lives in Wasilla.  His father, Jeremy is an Iditarod veteran.  Bjorn and Jeremy work together in training the team.

Champion Nicholas Sousa of Talkeetna, Alaska shared an interesting story of how he came to the race.  Nick’s father, Gerald Sousa has completed eleven Iditarod runs.  Nick is no stranger to sled dogs but up to this point, he’s never really spent much time on the runners behind a dog team.  Some three weeks back, Nick received a call from Ray Redington asking if he’d like to run a team of dogs for the Jr. Iditarod.  Sousa jumped at the opportunity and began working with the dog team immediately.  Sousa said he’s been in intense training for the past three weeks learning about mushing, dog care, sled driving and camping with the dogs.  Sousa says he plans to continue mushing, as he really liked the experience.  Sousa was named the Rookie of the Year.

The Sportsmanship Award, voted on by the mushers went to Julia Cross.  Upon receiving the trophy, snow hook and $2,000 scholarship Cross said, “Thanks to all the mushers.  It was really fun mushing with all of you.”  Cross is a Jr. Beargrease Champion. 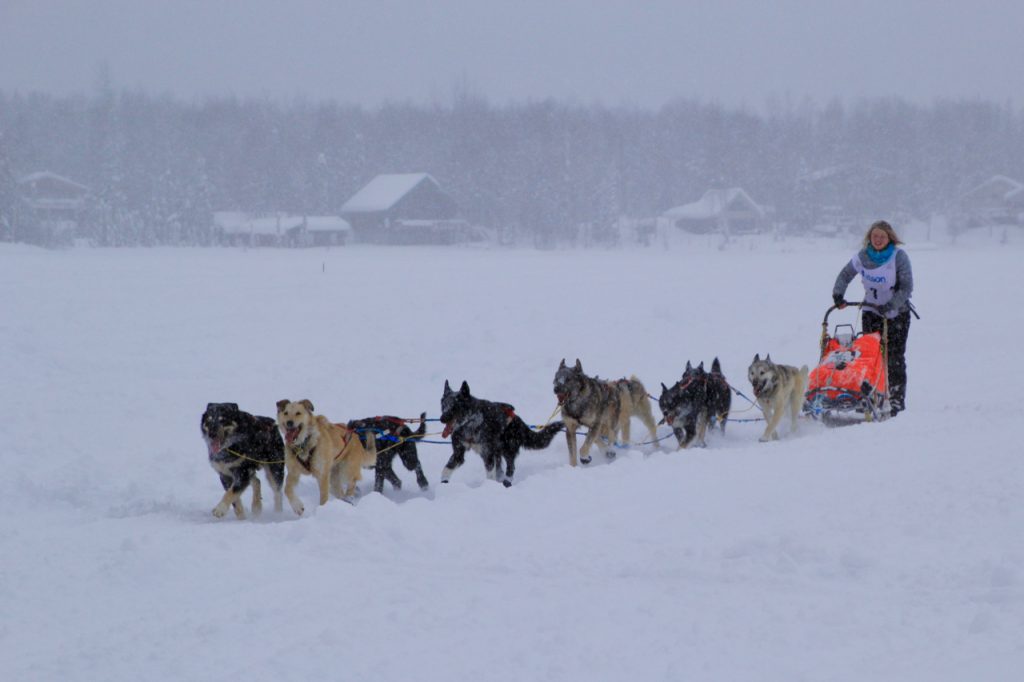 Anna Coke takes third place and leads a group of four to the finish.

Anna Coke led four mushers to the finish line in an hours time.  Coke claimed 3rd place and was the only veteran to finish in the top five.  Anna, from Wasilla, has run dogs from Jessica Klejka’s Tail Wind kennel for two years.  It’s not all about dogs for Anna, she plays violin in the MatSu Youth Orchestra. 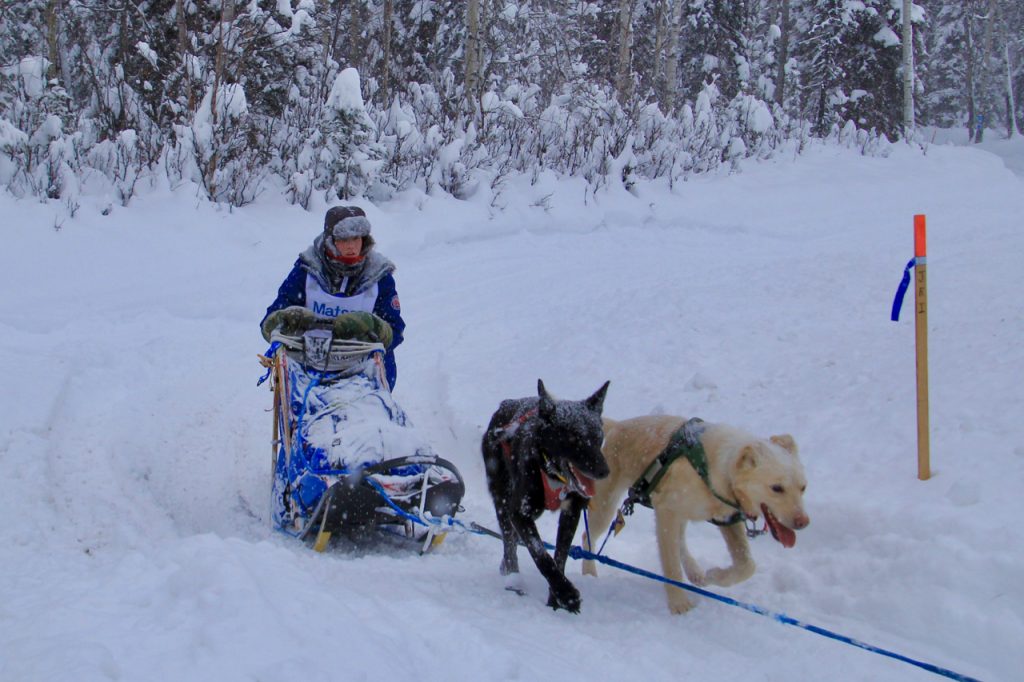 Kristal Hanson at the Crystal Lake Crossing 3 miles from the finish.

Kristal Hanson from Anchorage claimed 4th place.  Hanson and her father are now both veterans the Jr. Iditarod.  After the banquet, they posted together.  He wore a jacket the the Jr. Iditarod finisher’s patch and Kristal held her newly acquired patch. 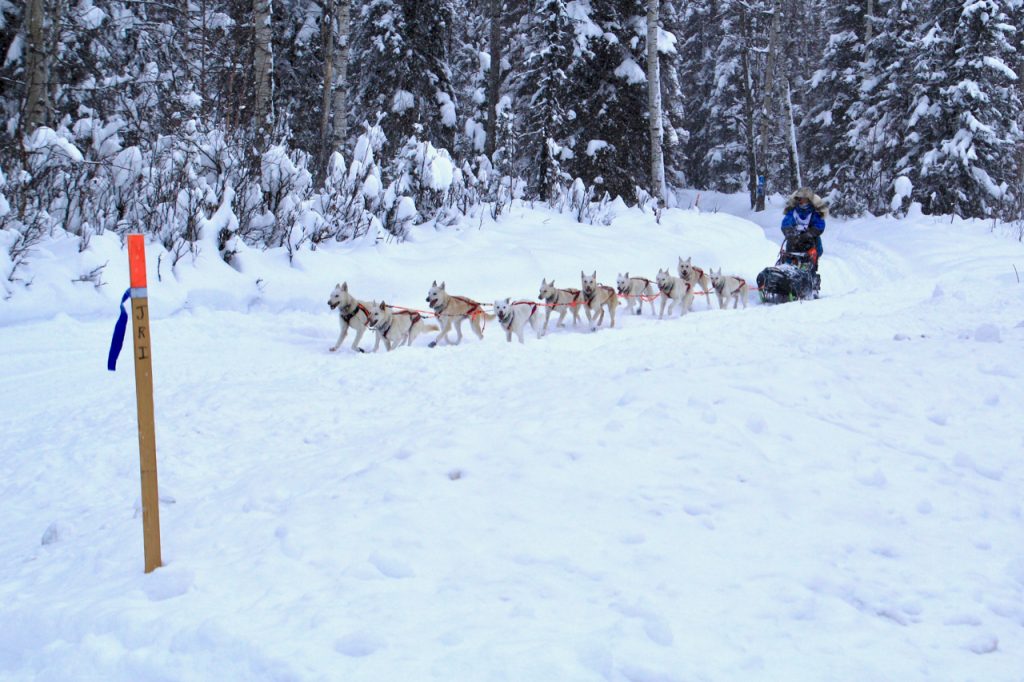 Calvin Daugherty, from Eagle River, claimed 5th with his team of Northern Lights dogs.  Calvin worked with Jim Lanier.  Lanier is know for his all white dog team. GPS Tracker showed Calvin to have taken a wrong turn on the return for Yentna.  After seeing no Jr. Iditarod trail markers, Clavin quickly turned his team and regained the trail. 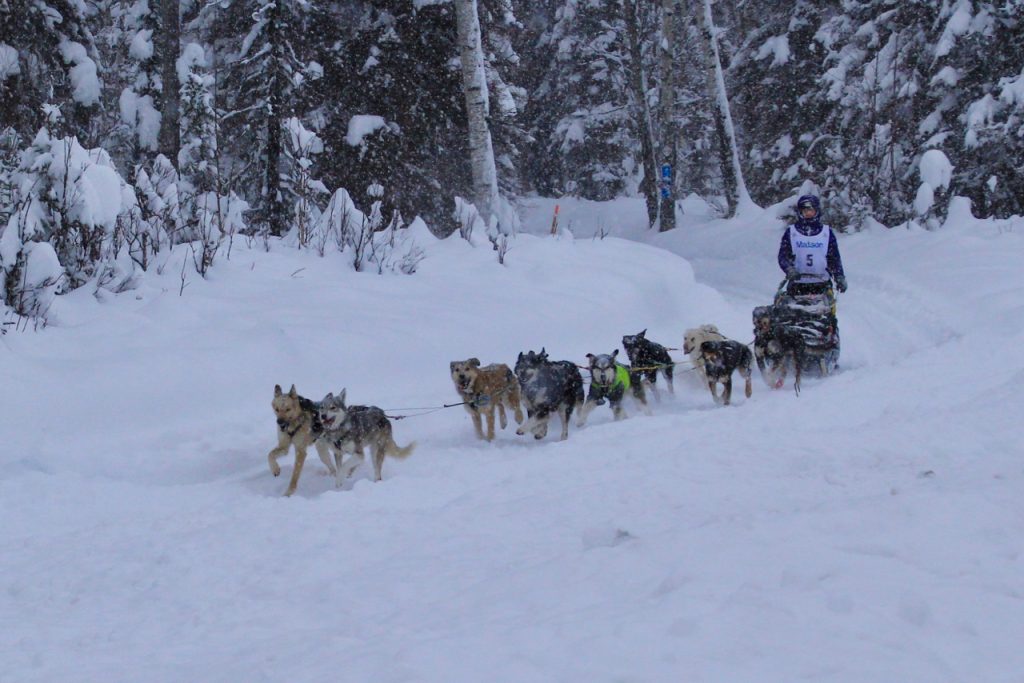 The Humanitarian Award, voted upon by the Veterinarians, went to Cassidy Meyer who claimed sixth place.  Cassidy, from Fairbanks, received a trophy and a $2,000 scholarship.  Meyer aspires to a career in Veterinary medicine and was pleased to receive the award.  She indicated it’s the best award a musher can receive. 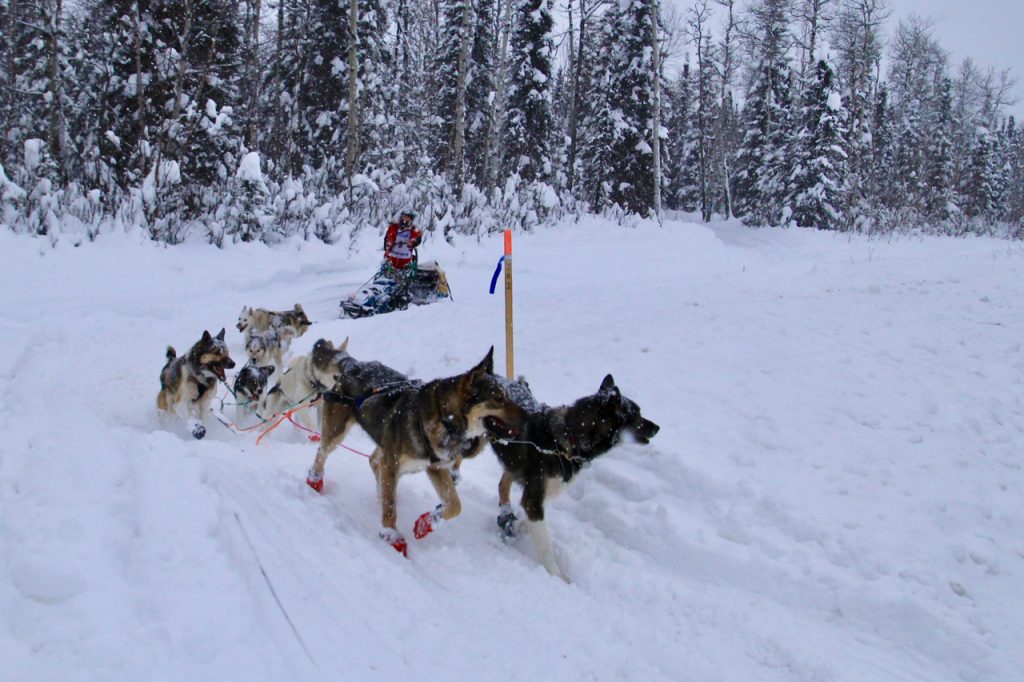 Red Lantern honors for perseverance went to Ida Kohnert.  The award is given to the final finisher prior to the completion of the banquet.  Ida, born and raised in Sweden, claimed seventh place.  She has handled dogs for her father in the Yukon Quest.  Ida intends to run her first Quest in 2023.

The Blue Harness went to Earhardt, a leader for Julia Cross.  Earhardt with Redington and Schouweiler bloodlines, is 18 months old, led the entire race and broke trail for 120 miles until Sousa Passed.  Julia says,  “Earhardt is a strong dog with a strong head who works hard all the time.”

Planning and implementing the race is a monumental undertaking.  Jr. Iditarod extends a sincere and heartfelt thank you to all the businesses and individuals who support the race and the teenage mushers.