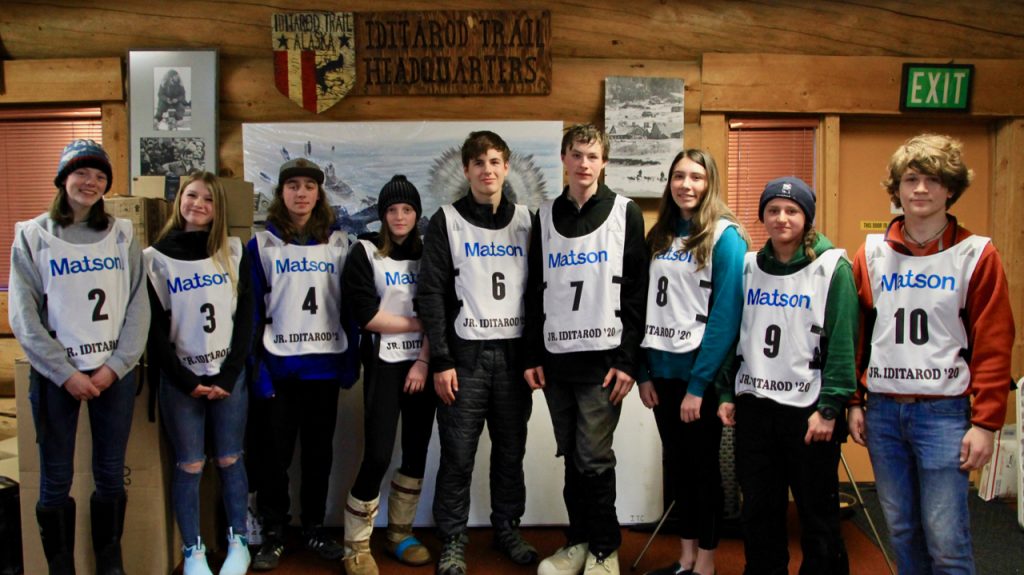 Nine mushers will be heading to Knik Lake in the morning for the start of Jr. Iditarod XLIII.  Earlier today mushers brought their dogs in for vet check.  This evening they gathered for bib draw, pizza and race rules/information.

As the mushers came forward to draw their bib number, they all had hopes and expectations of where they wanted to start within the group.  Rookie Julie Cross from Thunder Bay, Ontario drew bib number 2 and will lead the charge to Yentna Station.  Rookie Calvin Daugherty will be the final musher to depart Knik Lake.  Bib number 1 is reserved for the honorary mushers.

Teams start at 2-minute intervals.  The start differential is added to the ten-hour layover for the restart time at Yentna Station Roadhouse.  As an example, Julia Cross who has bib #2 will have 16 minutes added to her 10 hour required layover.  Calvin Daugherty, as the final musher to leave the start in bib #10 won’t have any addition time to make up.

The 43rd Jr. Iditarod has 4 veterans and 5 rookie mushers.  One veteran, Ida Kohnert, is from Sweden and one rookie, Julia Cross, is from Canada.  The other contestants are all from Alaska.  One of the rookies has started mushing within the last year.  Others in the field have a few years of experience and still others have been mushing since a very young age.

According to race officials, the outbound trail will be hard and fast.  With snow expected, the inbound trail will most likely be slower.  Trail boss Richard Plack explained the different configurations of trail markers to the mushers.  Race Marshal, Micah Dagerland, went over the rules and provided other information.  Dagerland is a JR. Iditarod veteran and 2006 champion.

John Cooper of Kipmik Products donated 100 booties for each of the nine mushers.   Barb Redington and Ann Meyer contacted local businesses to gather useful cold-weather and safety gear that was presented to each musher with their bib and dog tags.  Rookie mushers received a tool kit.

Follow the Jr. Iditarod with GPS tracker, meet the mushers, learn about the history, check the archives, enjoy photos and read Jr. Iditarod news at www.jriditarod.com.