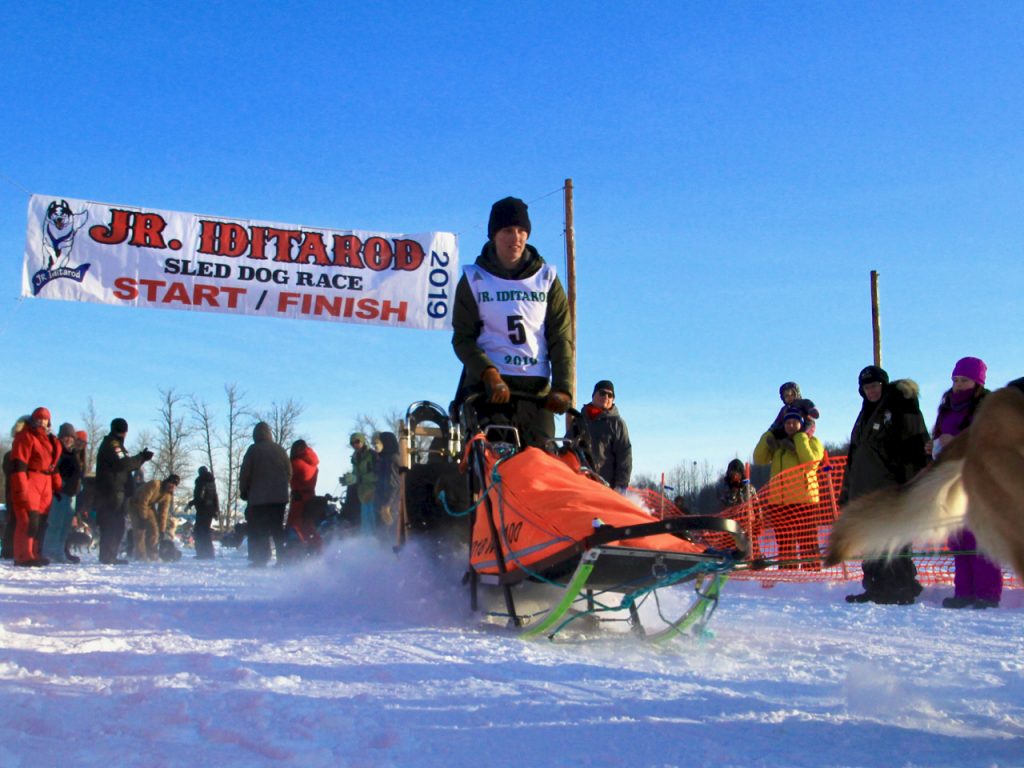 The young mushers are required to take a ten-hour layover plus differential at Yentna Station before beginning the last leg of the race to the finish line located at the Willow Community Center.

Teams take off from the Knik Lake start beginning at 10:00 am.  Departing at two-minute intervals, the start will last only 18 minutes so don’t be late if you want to catch all the action. The first team to start on Knik Lake will stay at Yentna for 10 hours and 16 minutes to account for the start differential.  The final team to start the race will be able to depart after spending 10 hours without any additional time for start differential.

The Jr. Iditarod Board of Directors has named long time volunteers, Dale and Linda Peterson, as the 2020 Honorary Mushers.  The Petersons will wear bib #1 for the race start.  Race contestant will wear bibs 2 thru 10.  Bib draw will be on Friday evening prior to the race.

As the sun breaks the horizon on the last Saturday of February, the young mushers, ages 14 to 17, will gather on Knik Lake, a short distance from the Redington Homestead.  Years ago when the kids had the idea of a longer race to hone their mushing skills in preparation for a race like they Iditarod, they consulted with Iditarod Founder, Joe Redington Sr.  Joe listen with great interest as the young mushers described their “dream” race.  He encouraged them to go for it.

The field for the 2020 Jr. Iditarod includes four veterans returning from their rookie run in 2019 as well as five newcomers.  Participants from the 2019 race include Bjorn Keller, Anna Coke Ida Kohnert and Cassidy Meyer.  The newcomers include Julia Cross, Calvin Daugherty, Kristal Hanson, Sam Paperman and Nicolas Sousa.

In 2019, Anna Stephan found that her third and final Jr. Iditarod was a charm.  Stephen, the only veteran in the race, claimed the Jr. Championship and was awarded a $6,000 scholarship to be put toward higher education or advanced training in the field of her choice.

Come back tomorrow to meet the Jr. Iditarod mushers of the 2020 race.