Jr. Iditarod – One Champion, All Winners The 40th Jr. Iditarod Champion was crowned three minutes past noon on Sunday of the two-day event. Andrew Nolan came onto Willow Lake with a spirited dog team. Nolan and Colby Spears had exchanged leads throughout the trip from Yentna. As he polled with the beat of the dogs, Nolan knew Colby was close behind and looked over his shoulder as he crossed the lake to the finish line at the Community Center. Indeed Colby Spears was close behind. Spears made the finish of his rookie Jr. Iditarod at 12:06 pm. The crowd of spectators didn’t have long to wait for Emma Shawcroft and Bailey Schaeffer to finish. Rookie Shawcroft arrived at 12:40 and veteran Schaeffer arrived at 12:49. Veteran Chandler Wappett finished at 13:34 and rookie Rachel Cockman followed at 14:48. There was a longer break for spectators before rookie Kali Herbst crossed under the finish banner at 17:27. Two minutes later veteran Katie Deits brought the City Slickers to the finish.

The banquet, celebrating the success and the personal journey of all the Jr. Mushers began at 18:00. Friends, family, mentors and race officials left their salad and chicken dinner to welcome rookies Anna Stephan, Rebecka Stephan and Katherine Winrich. Scratched musher Logan McCready-DeBruin brought his beautiful team of Siberian Huskies back from Eagle Song checkpoint. Rookie Hannah Mahoney claimed the Red Lantern award for perseverance at 20:58. Her mentor, Iditarod veteran Wade Marrs, was at the finish to congratulate Hannah and celebrate with the Michigan teen in realizing her dream of running dogs and doing the Jr. Iditarod.

Jessica Klejka, DVM was the speaker for the banquet. Her message to the teens was of congratulations. As a youngster living in Bethel, Klejka heard of the Jr. Iditarod and begged her parents to do the race. Many of her siblings have followed in her footstep in the Jr. Iditarod. Klejka remembers getting off the trail in her first race, traveling a few extra miles and winning the Red Lantern. In her final Jr. Iditarod Klejka lead Cain Carter across Willow Lake and claimed victory by two seconds. Klejka praised not only the mushers for their dedication and effort but also the families and friends for their role in supporting the young mushers. Dr. Jessica also applauded the Jr. Iditarod for being the race kids beg their parents to compete in. Klejka used her scholarship money from the Jr. Iditarod to become a veterinarian. She now works on her favorite animal – the sled dog. Jessica Klejka leads Cain Carter to the Jr. Finish in 2008

The Sportsmanship award was presented to Katherine Winrich of Reedsville, Wisconsin. The award is voted on by the mushers and goes to somebody who has been particularly helpful to the other competitors during the race. As it turned out this year, there was no single event of helpful ness or encouragement that stood out.   Race organizer, Barb Redington, said that all the mushers were helpful to each other. So all name were placed into a hat and Katherine’s name was drawn to receive a $2,000 scholarship. 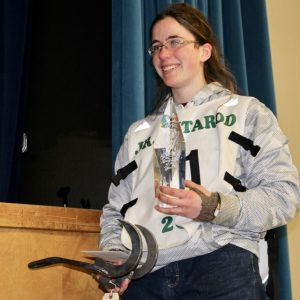 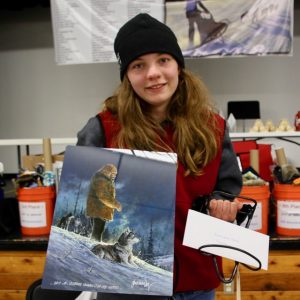 The Humanitarian award went to Kali Herbst. Kali, from Ketchum Idaho, was running her father’s Iditarod Team. She was diligently focused on exceptional foot care. Herbst’s father Trent was extremely proud of his daughter’s meticulous attention to dog care. He said, “Pretty cool, I’m pretty proud of her.” I can say I’ve seen Trent care for his dogs on the trail and Kali is a chip off the old block when it comes to dog care. Kali came into the race hoping to be recognized for her dog care. She said, “I love these dogs with my whole heart. Their care is everything to me. If there was an award I could pick, it would be Humanitarian Award.” Kali received a snow hook and a $2,000 scholarship.

The Blue Harness Award went to Andrew Nolan’s leader Heart. Heart describes how the dog performed for Andrew, not only in this race but also on the whole. Heart received a brand new blue harness.

The Danny Seavey Flat Time award went to Dolby Spears. Over the years, Danny as a mentor to young mushers has always encouraged them to strive to run an even speed on the way out to Yentna and back in from Yentna. A common mistake made by young mushers is to let the dogs run at their pace. As running athletes often realize, they go out of the start too fast and it ultimately affects their ability to finish strong. The same can be true for sled dogs. The Seavey award went to Colby Spears with an out time of 7 hours and 49 minutes and in time of 7 hours and 51 minutes. 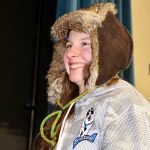 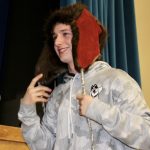 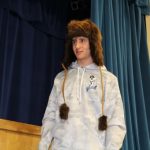 As the top female finisher, Emma Shawcroft received a fur hat created by Libby Riddles. Riddles was the first woman to win Iditarod in the famous storm run of 1985. Emma, from Fairbanks was honored by the award and will wear the fur hat proudly. Colby Spears who received Rookie of the Year honors also received a fur hat for his second place finish. The hat was created by hand sewn by Mary Ann Schoppmeyer of Aimaaqvik Kennel. Champion Andrew Nolan received a fur hat from Artic Midnight Furs.

The top five finishers receive scholarships to be used for higher education or specialized training. The first place finisher receives $6,000, 2nd $4,000, 3rd $2,500, 4th $2,000 and 5th $1,500. The Iditarod Trail Funding Committee generously sponsors the Jr. Iditarod and provides funds for the scholarships and special awards. Without Iditarod’s unwavering support, this race would not be possible. The entire Mushing community thanks Iditarod for their support.

The list of businesses and individuals who support and sponsor the Jr. Iditarod goes on and on, as does the list of people who volunteer to support the race in every imaginable way. This year because of fog, there are even more people to thank who provided snowmachines to transport race personnel out on the trail to the checkpoints. A special thanks goes out to the Dan and Jean Gabryszak at Yentna Station for their hospitality and to Mike and Paula Williams at Eagle Song for their hospitality.

Over time, I’ve volunteered at many events. I’ve been personally thanked by more Jr. Iditarod mushers than by any other group. These young men and women are top notch. They are an inspiration and a credit to their families, schools and communities. Well done and God Speed.