A wise but unknown person once said, “The thrill is not in winning but in the courage to join the race.”  The Jr. Iditarod is the embodiment of that statement.  The banquet is a celebration of success for these young mushers and it gives the community, race advocates, friends, fans and family an opportunity to celebrate with the mushers. Long time volunteer Stan Hecker was named as the Honorary Musher for the 39th running of the race.  Hecker had the opportunity to say a few words at the banquet.  He reminded the teens to cherish the friendships they create in the Jr. Iditarod.  These are the memories and the experiences they’ll remember for the rest of their lives.  It’s the hard work you put in that makes the Jr. Iditarod even more special.

After a hearty meal of lasagna, garlic bread, lettuce salad and cake the program for the evening got under way.

Captain Craig Huffman of Alaska Airlines spoke briefly about the value of competition.  He said  competition creates opportunities to prepare and succeed.  In a race such as the Jr. Iditarod it’s about decision making and the practice that creates a sound knowledge base to make decision.    Huffman believes competition is necessary for success and he advised the mushers to think hard about the decisions they make in high school.  Lastly, Huffman encouraged the mushers to keep doing what they’re doing. 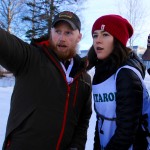 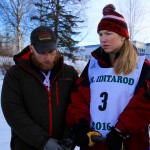 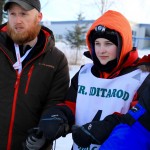 Race Marshall, Danny Seavey, competed in the Jr. Iditarod between the years of 1997 and 1999.  He knows from experience that mushers choose to mush because they love it and want to do it.  He said, ”You can’t lie to your dogs and you’re fortunate you’ve found something you are passionate about. 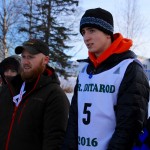 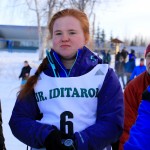 Second place finisher, Andrew Nolan won the Seavey award for Flat Run Time.  This honor goes to the musher whose outbound run and inbound run time are the closest with a shorter inbound time breaking any ties.  When the dogs begin a race, they are charged and ready to go.  The musher needs to pace the dogs so they are the strongest on the last half of the race.  All ten mushers did an outstanding job of keeping their outbound and inbound times close.  Andrew Nolan was the closest with his inbound time being 13 seconds faster. The Sportsmanship Award and a $2,000 scholarship went to Andrew Nolan.  He’s a very quiet fellow but is always willing to lend a hand to a fellow musher.  He’s not only willing to share valuable advice gleaned from his personal mushing experience or how to fix something advice but he shared cookies too.  This seems to be a way of life for Andrew as he also received the Sportsmanship Award in 2015. 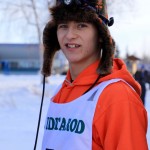 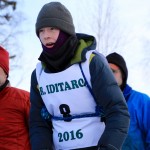 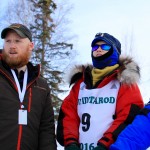 Called to the stage to receive the Rookie of the Year award was Bailey Schaeffer.  Bailey started mushing at a very young age because her family mushed.  Rookie of the Year honors go to the highest finishing first year musher.  Bailey was also the highest finishing female.  For this accomplishment, she received a fur mushing hat hand crafted by Libby Riddles.  In 1985, Libby was the first female to win Iditarod.  She did so in a famous storm run that caused other mushers to hunker down and wait out the storm. 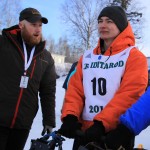 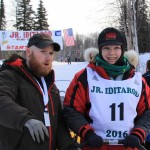 Denver Kay Evans was running Ryan Redington dogs.  When she brought her dogs forward to the trail to depart from Yentna.  When they reached the trail, they stopped when Denver called whoa.  They stood very patiently through their countdown, leaning but not lunging, jumping or barking.  They were focused, they were ready to run.  That energy saving mode is a trait Ryan instills in his dogs and Denver reinforced it beautifully.  Dr. Jayne Hempstead and Dr. Phil Meyer selected Denver Kay to receive the Humanitarian Award and $1,000 scholarship.  Her dog care and run management strategy was equal to that of a professional which is quite remarkable for a musher so new to the sport. The Blue Harness Lead Dog Award goes to an outstanding dog.  Often it’s the case that one of the Champion’s leaders receives the award.  Such was the case, Kevin Harper’s Orville, who lead the entire race received the Blue Harness.

The Red Lantern, a symbol of perseverance, goes to the final musher to cross the finish line.  Katie Deits was the final musher to cross the line and was just 1 hour and 53 minutes behind the champion.  With the lack of snow in the Anchorage area, Katie had done most of their training with a four-wheeler.  It was obvious that her dogs were well trained even though sled training was only a small part of the miles.

Finishers arrived in Willow within 1 hour and 53 minutes of each other.  As these young adults came down onto Willow Lake and sped to the finish line across the lake, one couldn’t help but think of the humble beginnings of the Jr. iditarod.  In 1975, a bunch of mushing friends were sitting around a campfire on a mushing trip.  They talked about a competitive race that would provide a training ground for young mushers like themselves who were interested in distance racing.  The kids brought their idea to Iditarod founder, Joe Redington Sr.  Joe listened and advised the young mushers to go for it.  Many people came together to build the Jr. Iditarod.

Results for the 2016 Iditarod along with Scholarships awarded are listed below.  For further information about the 2016 race, go to the Jr. Iditarod webpage.

Local merchants and musher craftsman go all out in supporting the Jr. iditarod.  Sponsors and supporters of the Jr. Iditarod for 2016 numbered just under eighty.  Many thanks to all for supporting these incredible young mushers.