Jr. Iditarod mushers brought their dogs to Iditarod Headquarters in Wasilla for vet check on Friday morning.  They were greeted by veterinarians Phil Meyer of Wasilla and Jayne Hempstead of Cantwell.  Both vets have a long history with the Jr. Iditarod. Dr. Phil who practices at the Wasilla Vet Clinic said he’s been with the Jr. Iditarod since it started.  The race began in 1978 so that would make this his 39th year!  Over the years, he’s worked many sled dog races as veterinarian, race director,  dog handler, trail marker, race judge and even dishwasher.  Ann, Dr. Phil’s wife, is a tireless volunteer for the Jr. Iditarod organization.

Dr. Jayne who practices in Cantwell has been with the Jr Iditarod for twenty plus years.  when she first moved to Alaska in 1992 to practice in Palmer, she knew nothing about sled dogs.  A musher who used the Palmer Clinic invited Dr Jayne to take a turn on the runners and it’s all history from there.  When Dr. Phil began looking for addition veterinarian help, Dr. Jayne agreed to give it a try.  Did she think the commitment would last for 20 years?  Whether she did or not, Hempstead says, “Working with the Jr. Iditarod has become a tradition and I intend to continue for as long as I can.” 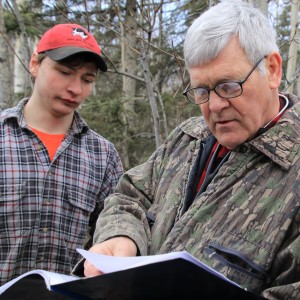 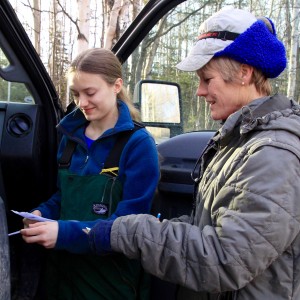 Jr. Iditarod rookie, Denver Kay Evans was just finishing up with Dr. Phil and Dr Jayne.  They’d checked each of her dogs over thoroughly and went through all the paper work to verify immunizations.  Evans who lives in Skagway is training with Ryan Redington.  She introduced one of her leaders, Egg.  As you might guess, Egg was in a litter of puppies named for breakfast food.  Denver Kay is very appreciative of all the support she has received from the community of Skagway.  She says, “What we’re doing is a first for the community and they are so involved.  It’s nice to have that kind of support.”

Veteran Rose Capistrant from Healy lined out her dogs were very happy and full of energy.  No doubt they were expecting to see a sled, gang line and harnesses waiting.  Sorry pups, not to today.  Like the other mushers, Rose will focus on keeping her dogs happily hydrated with the warm weather.  They’ll be snacked often along the trail with fish. 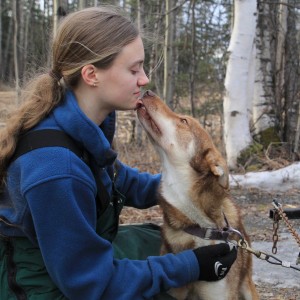 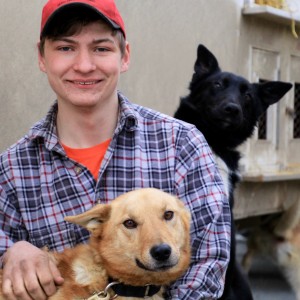 Dakota with Optimus and Newton

Earning fourth place and Rookie of the Year honors in 2015, Dakota Schlosser is returning as a veteran.  He’s known for his passion for building and designing things, especially planes, hot rods and dog sleds.  He says right now he’s focusing on building his dog team.  Schlosser started out with two puppies from Melissa Owens and two from Jeff King.  He’s raised and trained all his own dogs.

Defending champion Kevin Harper arrived with another very healthy and energetic looking dog team.  While living in Washington state, Kevin participated in wrestling and soccer.  Since moving to Alaska, he’s focused on sled dogs.  The 2014 Jr. Iditarod was his first race.  He finished in third place claiming rookie of the year honors and also was voted by his peers to receive the sportsmanship award.  In 2015, he earned Jr. Iditarod gold by a slim margin of 2 minutes.  Asked about his strategy for 2016, Kevin replied with one word – WIN!

Marianna Mallory was the final musher to bring her team in for vet check.  She’s returning from her rookie Jr. Iditarod in 2015 where she was chosen by the race veterinarians to receive the Humanitarian award for exemplary dog car.  Mallory says, “The most important thing about mushing to me is the care of your dogs.  No matter where we place, my dogs should feel like they’ve won.  That’s one thing I love about mushing, your ego has no legitimate place on your team.  It’s all about the dogs.” Next up for the Jr. Iditarod racers is the Rookie Meeting scheduled just prior to the mandatory musher meeting at 5:00 on the evening before Jr. Iditarod.  The Jr. race is scheduled to begin in Willow at the community Center at 10:00 on Saturday February 27th.  Follow the Jr. Iditarod at jriditarod.com.