The ever good natured and resourceful Stan Hecker has been named as the Jr. Iditarod Honorary Musher for the 39th running of the race.  It was only by chance that Hecker came to Iditarod as a volunteer. He came to Alaska in March of 1999 to visit high school classmates.  Those friends happened to live on Clapp Street in Wasilla and the Iditarod Trail Sled Dog Race just happened to run right down the street in front of their house.  Hecker was awe struck.  Learning about the need for literally hundreds of volunteers to work with the race, Stan answered the call.

Hecker first volunteered for Iditarod and then found his way to the Jr. Iditarod.  His jobs for the Jr. race have been many.  He’s worked diligently on setting up and dismantling the starting chute and the finish line.  He’s assisted in setting up and cleaning up for the Jr.’s banquet that followed their race.  At the start line, he was the voice reading short bio’s of the young mushers as they approached the start banner.  He’s held many of sled at the start line.  Stan has been there to do whatever needed doing. 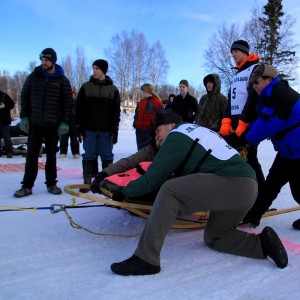 Holding sleds for the countdown 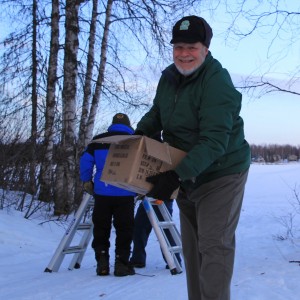 There’s always something to do

Story telling is his specialty.  He has a mind like a steal trap and can recall stories from every race he’s worked.  Not only does he remember stories but he remembers everybody’s name.

Folks say one of his finest hours was setting up a rather impromptu starting line at Willow for the Jr. start.  Innovation is his middle name.  He used Dr. Phil’s ladder, drop dog cables and the banner. With luck on his side, the set up worked.

Stan last volunteered about five years ago but for this honor he returned for the Jr. Iditarod start.  Yes, there he was helping to set up the banner and holding sleds for the countdown.  For a guy as dedicated as Stan, old habits die hard.

Stan is a lifelong resident of Michigan, except when he’s in Alaska volunteering for Iditarod.  Stan is a veteran having served as an officer in the US Army.  He’s a Michigan State graduate and has worked there for many years.

Stan says he’s both delighted and honored at having been named the Jr. Iditarod Honorary musher.  It’s been both a privilege and joy to work as a volunteer for this race.  The kids are very special and so are the other volunteers.