Eye on the Junior: 2016 Race Has First Entries Defending champion Kevin Harper devoured a plate of excellent food provided by Golden Corral, then with cold cash and paperwork in hand, made his way to the registration table to enter his third Junior Iditarod.  Kevin will be a senior at Wasilla High.  After graduating he plans to attend college and become a pilot.

Harper placed third in 2014 as a rookie and was chosen by his peers to receive the sportsmanship award.  It seems that Jimmy Lanier’s leaders were freed from his team when the swing dogs chewed through the gang line.  The wayward pair caught up to Harper who gathered up the footloose pair, turned his sled to head back down the trail and returned with the fancy-free dogs to Lanier.  After making the delivery, Harper turned his sled another 180 degrees and was once again headed toward the finish line.  Doing a u-turn with a car is one thing, doing it with a dog team can challenge the best of mushers.  Excellent driving for a rookie!

Harper’s 2015 Championship came in a dual with Jimmy Lanier.  Jimmy left the rest stop at Alpine Creek Lodge with an 8-minute lead over Kevin for the 65 mile return trip to Cantwell.  Sixty-three miles later, Kevin passed Jimmy, sustained the pass and took the race by two minutes.

Veteran Dakota Schlosser has also entered Junior Iditarod.  Dakota was attending ground school so his parents came to do his paperwork and pay his entry fee.  As a rookie, Schlosser placed 4th in the 2015 Junior Iditarod, earning scholarship monies from race sponsor Lynden.  Dakota earned Rookie of the year honors for the 2015 race by being the first rookie to cross the finish line.  He has tapped into that fund to help pay for flight training.

Dakota’s snowshoes stored under the sled 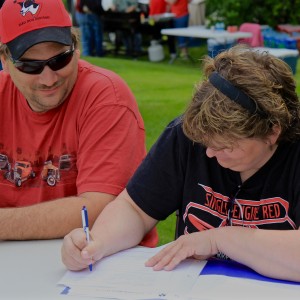 Dakota’s parents filling out the paperwork

Dakota, a senior at Su Valley High, is into building.  He has participated in build-a-plane, he enjoys building street rods, he likes working on cars and he builds dog sleds.  Pretty sure that Dakota designed and engineered the sled he used for the 2015 Junior.  When it came time to produce his snowshoes for the equipment check, Dakota rolled his sled onto one runner and there his snowshoes were neatly secured to the bottom of the sled.

The Junior Iditarod, sponsored by Lynden, is off to a great start with these two entrants.  By race time on the final Saturday of February, I’d expect 8 or 10 more Juniors to be entered in the 150 mile race.  Normally the Junior Iditarod starts on Knik Lake and runs 75 miles out to Yentna Station Roadhouse.  The Juniors are required to rest for 10 hours plus the start differential before leaving Yentna for the75 mile run to the finish line at the Community Center in Willow.  2015 was the second time the race was relocated due to poor or non-existant snow conditions.  In 2003, the race moved out to Glenallen.  In 2015, the race was moved north to Cantwell.  What will 2016 bring for the 39th running of the Junior Iditarod?  Only time will tell.  Good luck Kevin and Dakota.