Conway Seavey drove a smart looking team off the Yentna River into the checkpoint at 4 minutes before four o’clock this afternoon. Right on the tails of his sled runners was Jimmy Lanier arriving at 2 minutes past 4:00. Ben Harper was in at 16:10 followed by younger brother Kevin at 16:19. Do some quick calculations to see that only twenty-one minutes separated the first four teams into Yentna.

The differential for start time is added to the ten hours of layover served at Yentna. The first team out in the morning will be Conway Seavey leaving at 02:08. Seavey will be followed at 02:10 by Ben Harper. Jimmy Lanier will take his team off the straw and down onto the river at 02:18. Rookie Kevin Harper will begin his return run at 02:23.

Judging by the outbound run times of between six and eight and a half hours, it’s quite possible that the Junior Iditarod champion will be crowned around 08:00 in the morning. The sun won’t officially be up but the sky will be transitioning to daylight.

Teams coming into Yentna looked energetic, like they expected to keep going and didn’t really buy into the concept of resting until the booties were off and the straw was down. If that wasn’t enough to convince the canine athletes it was time for a nap, appetizers followed by a warm gourmet meal did the trick. 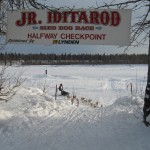 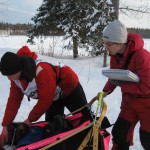 Upon climbing up the bank of the river into the front yard of the Yentna Station Road House the mushers were greeted by spectators and race officials. The timer recorded the in time and the number of dogs and secured the required signature. While the mandatory equipment was being checked, the timer did some calculations and just prior to being parked, the timer advised the musher of their earliest departure time.

Musher after musher said the trail was good and classified their run out as good. Most agreed the trail was fast and of course, fast makes for fun. After tending to their athletes, the mushers will cook for themselves and gather around the bon-fire to enjoy time with their fellow competitors. If they follow the advise given byveteran Ben Harper at the rookie meeting they will limit the time around the fire and follow the example of their dogs and get some sleep before it’s time to depart in the very wee hours of the morning.

Three more mushers, Ashley Guernsey, Andrew Nolan and Jannelle Trowbridge came in within 15 minutes of each other to move the total in the checkpoint up to seven. The final two mushers to complete the first half of the race, Joshua Klejka and Nicole Forto arrived about an hour apart. Joshua said his team had a nice run and Nicole said she had to change out leaders a couple times before finding the right combination.

For those of you who remember May, a dog lent to Newton Marshall by Jim Lanier, who had her own adventure last year during Iditarod, Jimmy Lanier has May in lead. Asking Jimmy how May did out there in front of his team he replied she was born to be a leader. Through her adventure she must have found out unless you’re the lead dog, the scenery never changes.