Rookie Junior Iditarod mushers attended a clinic at Iditarod Headquarters in Wasilla on Thursday evening sponsored by the Junior Iditarod Board of Directors. Speakers shared information with the young mushers based on their own experiences and expertise.

While all in attendance ate pizza, veteran Junior Iditarod musher, Ben Harper, shared his perspectives on the race. Harper who has crossed the junior finish line in 3rd and 4th place over the past two years told the rookies to enjoy the race, take your time and get some sleep during the ten hour layover.

The teens also got a look at the device that would track their whereabouts on the trail. Unlike the brick sized device that was attached to the sled in previous years, this device fits into a dog bootie!

Marilyn Mapes emptied and then explained the contents of her sled first aid kit. It contained items for both mushers and canines. With relatively warm conditions expected for the race, Mapes reminded the juniors to bring a fresh base layer and pair of socks along to change into thereby avoiding the chill that results from sweaty clothing. She also reminded the teens about the importance of hydrating and eating. 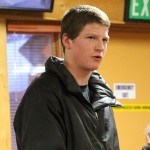 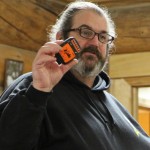 Tracking device that fits into a bootie 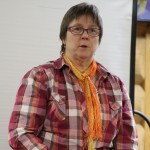 The subject stayed with kits when Jim Uhl presented each of the rookies with a repair kit designed by Bernie Willis. Uhl, a retired “tech ed” teacher explained the items in the kit and shared some very innovative techniques for sled repair and fixing things that are prone to break while mushing. 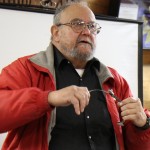 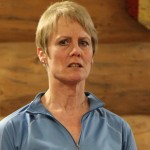 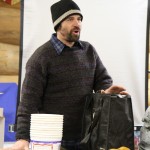 Veterinarian, Jayne Hempstead, advised the teens to think ahead and be prepared for what you might not expect to happen. She emphasized canine foot care – an ounce of prevention is worth far more than a pound of cure. For the second time during the evening, the rookies heard – take care of yourself to take care of your dogs – eat, drink, eat, drink and above all eat and drink 5-8 miles before coming into Yentna Station.

Next up was Cim Smyth with advice about “snacking” the athlete dogs. Cim is a Junior Iditarod veteran of four years and champion in 1994. He’s also a veteran of twelve Iditarod runs. Smyth shared what’s worked for him on short faster runs like the Junior Iditarod, then he asked each of the rookies what their plan was. Lots of excellent conversation took place between Cim and the teens. Seemed the consensus was small treat sized snacks of salmon or beef every couple of hours. Zach Steer shared his “kit” with the teens also – his system for dressing and system for organizing his gear. Both Zach and his wife Anjanetta have run Iditarod and many other mid-distance races. He showed a short video of putting all the necessary gear on. It amounted to thirty-seven pieces, which he admitted was a bit of an exaggeration. He then dressed himself in the layers he prefers and explained why they worked well for him. Steer encouraged the teens to create a system that works for them personally. To avoid unpleasant surprises, race in what you train with. Zach’s system for organizing gear and tools was to place items in the same pocket or bag all of the time, sort of the place for everything and everything in its place concept. It works because you can find what you need by habit without having to try to remember or think, “now where did I put that.” For the third time during the clinic, the teens heard, “ Eat several miles ahead of coming into a checkpoint. That way you are at your best to take care of your dogs.”