All Juniors into Happy Trails

From the Yentna Station end of the Junior Iditarod, it was clear that the race would come down to the wire and it did. Conway Seavey left the layover stop two-minutes ahead of Ben Harper, his closest competitor. IAF planes aren’t air born before daylight so there was little chance that Yentna officials would see the winners finish. But I was fortunate to catch up with Conway at Happy Trails later in the morning. 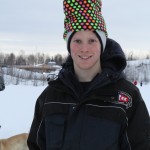 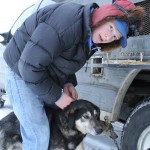 Seavey described the run in from Yentna as almost magical. A couple of hours after he was on the trail, the clouds gave way to a star studded sky. Northern lights popped and danced and the quarter moon rose above the tree line. As the sun inched above the horizon the mountains were bathed in hues of pink. Even a guy who knew he could be passed at any minute took time to notice the beauty Mother Nature graciously provided.

Seavey described the trail as fast with few problems other than a small amount of overflow. Ben Harper caught and overtook Conway on more than one occasion but it was Seavey who persevered and regained the lead, holding it through the finish line.

Asked if he spent much time looking over his shoulder to see where Ben was, Conway said yes until he hit the expanse of lake, swamp and tundra near Happy Trails. Once he made the lake, he quit looking back to preserve his image and focus on moving forward.

Ben Harper crossed the finish line a mere two-minutes behind Seavey but forty minutes ahead of brother, Kevin Harper. Kevin and Jimmy Lanier were in a tight race for 3rd and 4th place with Harper besting Lanier by only ten minutes. Fifth place went to rookie Andrew Nolan. 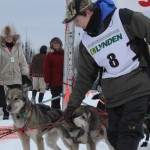 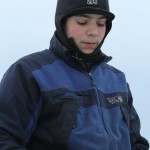 In Seavey’s first Junior Iditarod, he and Marissa Osmar lost the trail and took a lengthy detour. While they left Yentna Station in the lead, they made the finish line just placing in the top ten. Jeremiah Klejka didn’t realize Seavey and Osmar had lost the trail and was completely befuddled when folks were so excited as he approached the finish line, especially when he heard, “Congratulations Champ!” He had no idea he was leading the race. Seavey scored gold on his second attempt at the Junior and silver on his third attempt. His second victory came this year, at the age of 17, and will be his last Junior Iditarod run

Top finishers of the Junior Iditarod receive scholarships from Lynden to use to further their education. Seavey who now wants to concentrate on his singing and song writing, has used previous scholarship funds for voice lessons. Congrats Conway and good luck in your chosen career.

The Red Lantern goes to rookie Nicole Forto who made Happy Trails shortly after 3:00 this afternoon. The finishers banquet is schedule for the Willow Community Center at 6:00 Sunday Evening. It’s a true celebration of success for the accomplishments of the teens as well as their excellent camping and dog care skills.