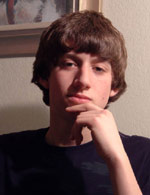 Jeff Deeter, 17, became interested in mushing at the age of seven while living in the Arctic village of Noorvik. In the summer of 2003, Jeff began working with Iditarod veteran Frank Sihler and Moving Fast Kennel in Knik. Jeff now has 12 dogs that are kept at Moving Fast. Before running dogs, Jeff worked as an assistant for wildlife biologist Terry Spraker in the Pribilof Islands, and a year later worked as a vet shadow at Wasilla Veterinary Clinic where he studied the different procedures that were performed on the patients. He is now employed during the summer months at Recluse Gardens in Wasilla. Jeff’s other interests include biking, camping and snowboarding, as well as architecture and photography. After running in the 2008 Iditarod, Jeff plans to attend college with focus in the field of biology. Sled dogs and mushing will always be a part of Jeff’s life. Jeff is in the 11th grade. He participates in sports and photography and also enjoys swimming, biking, fishing, boating and camping.