The stage is set for the forty-first JR Iditarod. Earlier today mushers brought their dogs in for vet check. This evening they gathered for bib draw, pizza, cake and race rule information. Eleven mushers will take to the trail on Saturday morning.

Bib number 1 is reserved for the honorary mushers – Bernie and Jeanette Willis. As the mushers came forward to draw their bib numbers, they all had hopes and expectations of where they wanted to start within the group. Clearly Bailey Schaeffer was happy to draw bib number 12 rather than bib number 2. Charmayne Morrison of Montana will be the first musher to take the trail.

Teams start at 2-minute intervals. The start differential will be added to the ten-hour layover. As an example, Charmayne with bib number 2 will have twenty minutes added to her ten-hour rest. Bailey, wearing bib number 12, won’t have any differential time added. 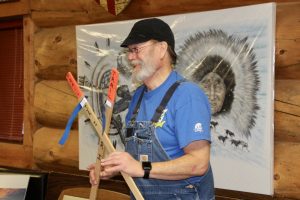 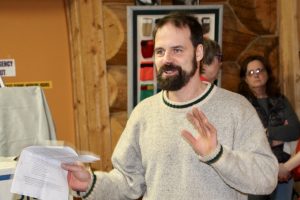 Trail Boss, Richard Plack, provided detailed information about trail markings and conditions. The trail is in excellent shape but snow overnight might slow it down a bit. He demonstrated the different configurations of trail markers and explained markings for turns, where to go and where not to go.  Race Marshal, Cim Smyth, went over the rules with the mushers and their parents.

John Cooper of Kipmik Products donated 500 booties. Five lucky mushers went home with a package of 100 booties.  Local merchants provided numerous useful items for each musher like water bottles, hand warmers, toe warmers, fleece gloves, neck gators, warm socks, a hot, blinking light and snacks.  The generosity of the local merchants is astounding when it comes to supporting the kids in this race.

Bib numbers for the mushers can be found on the JR Iditarod web page. Check the website often over the weekend to follow the progress of the race. GPS tracking is available.  The 41st JR Iditarod has five veteran mushers and six rookie mushers. Of the six rookie mushers, four are from the lower 48 – Montana, Washington, Wisconsin and New Hampshire. These out of state contestants have had a wide variety of previous race experience ranging from the Race to the Sky, the Can-Am classes and races in the Upper Peninsula of Michigan. Veterans of the race have local trail experience that will be a valuable asset.

God speed to all!